No matter the new technology, there are still some age-old issues that must be tackled and they haven't forgotten that at SXSW Interactive this year. A theme running through the sessions I attended on day two of the conference was working with teams to bring ideas to reality.

Many of the people attending this conference are what you would call creatives (although some don't like that term), and creatives are not known for being very organized. According to Scott Belsky, CEO of Behance, organization is vital to making ideas actually happen, so his team has created The Action Method.

I found it rather interesting that The Action Method was not really that far from the more mystical Vision Boards that author Joyce Schwarz had talked about at her book reading the the SXSW Day Stage Cafe. I'd stopped by that one to see The Defuser make a guest appearance.

In both, it was about making your ideas happen. Belsky noted that ideas don't happen because they're great, it takes organization, communal forces and leadership capabillity. These themes popped up again in the three hour Hyper Island workshop I attended.

Hyper Island is "a digital school in an old prison" in Sweden that provides education in interactive design, communication and digital business management. At SXSW Interactive, they held their first workshop outside of Europe that presented a condensed version of their learning environment.

One of the more thought-provoking things mentioned as we discussed why designers will never get to redesign Amazon.com (the thought being that rather than complete redesign, there will only be continuous evolution based heavily on testing and metrics) was that public relations and social marketing are replaced search engine optimization. Think about that one a while. 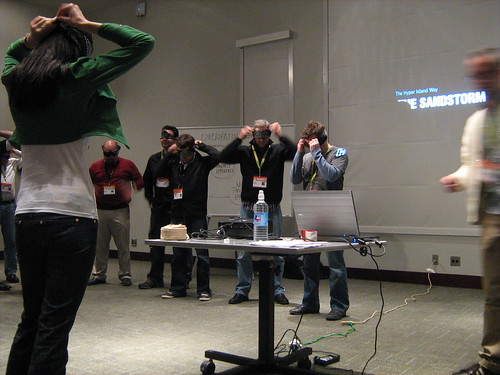 Before then breaking into a discussion of group dynamics, several volunteers participated in an exercise where, blind-folded, they tried to first find a rope and then set it back down on the ground in the form of a square. It was rather funny, and no square was ever achieved, but it facilitated great conversation about Susan Wheelan's findings on the stages of a team.

So, even with all the new and emerging technology that continues to come our way, it will always go back to the basics of human behavior to make anything happen with it. And despite what the SXSW Film attendee I overheard in the elevator thinks, all this new interactive technology is not all about way to not actually interact with people.

Bett 2020: Building the Classrooms of the Future

Getting reacquainted with my digital office after the winter break served as a useful reminder of how integral technology has become to the way UK consumers and businesses interact, work … END_OF_DOCUMENT_TOKEN_TO_BE_REPLACED

Dell Technologies recently sponsored Haitian post-college professional Nahomie Auguste’s trip to One Young World, a global forum that gathers young leaders from around the world to develop solutions to the … END_OF_DOCUMENT_TOKEN_TO_BE_REPLACED

We are often inspired by creators who see the world in the widest range of colors. Emerging technologies and tools continue to provide content creators with more precise, accurate and … END_OF_DOCUMENT_TOKEN_TO_BE_REPLACED

Our Roar is Heard in Our Success: How Dell Women’s Entrepreneur Network is Changing the World for Women Founders, One Scale Up at a Time